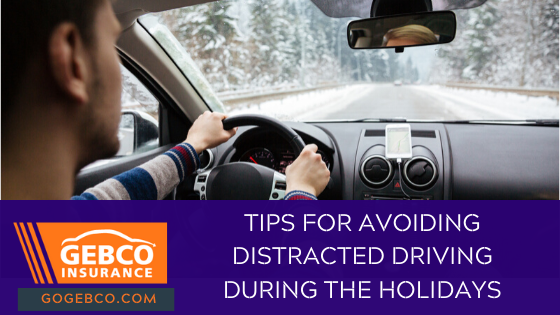 “Distracted Driving” includes many of the behaviors that we do every day in our cars, (and take for granted) such as: changing the music or station, a little daydream here and there (especially on a long drive), and taking a peek at our phones to see who just called.

Although these things only take a split second, that’s all it takes for something bad to happen.

So, when you’re driving during the busy holiday season (or any time, for that matter), keep the following tips in mind to ensure safe travel.

Keep your hands off your phone.

The National Safety Council estimated that in 2019, 422 fatalities as a result of car accidents would occur on Christmas Day.

In order to protect yourself while on the road, it’s a good idea to invest in hands-free equipment and voice commands to remain engaged in driving.

Seatbelts, when used, are shown to be 45 percent effective in preventing fatal car accidents for front-seat passengers. In fact, the National Safety Council forecasts that 164 lives (and even more) could be saved during the holiday season with the added protection of seat belts.

In a study conducted by TrueMotion, a company of driving apps, it was discovered that speed rates are higher than usual during the holiday season as well—a 33 percent spike.

Being late to your destination is far better than getting yourself or another person into a dangerous or deadly car accident.

Keep on the lookout for distracted drivers.

It’s apparent when someone doesn’t have their eyes on the road—slight swerving and not using signals can be clear signs that the driver is either impaired or not paying 100% attention.

Especially in the winter, when inclement conditions can cause anyone to unexpectedly slide out of control, it’s important to keep an eye on the others driving around you.

The National Safety Council reports that on Christmas Day of 2016, the percentage of impaired-driving fatalities related to alcohol made up 32 percent of all fatalities on that day, whereas the annual average that year was 28 percent.

The holidays call for fun and festivities, and alcohol is no exception. However, be responsible about alcohol consumption if you are driving or use a designated driver if you are attending events where you plan on drinking.

As a result of COVID-19, there will be far fewer holiday gatherings – work, family, or otherwise. There will be much more staying at home this year. But don’t take this for granted when you do go out on the road.

Since you can’t avoid all disasters when it comes to driving during the holiday season, it’s a good idea to give yourself an extra layer of protection with an affordable car insurance plan. Get in touch and find out how you can get started.